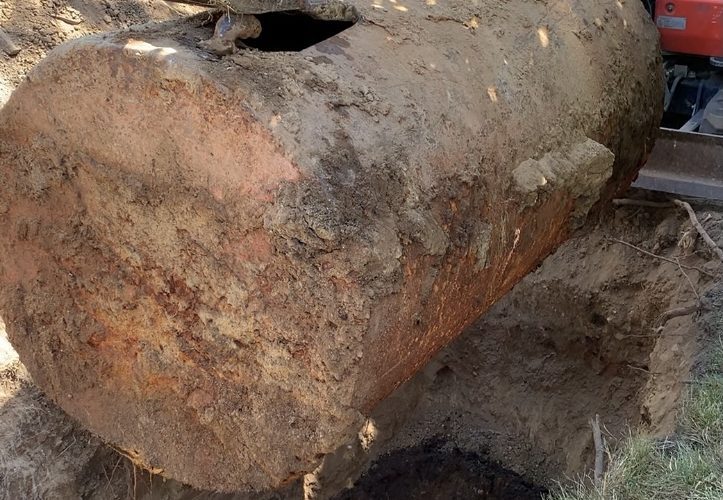 A bit of background on heating oil. It was the primary fuel source on Vancouver Island prior to natural gas becoming available in 1992. Homes were typically heated by forced air furnaces or boilers that burned heating oil.  This oil needed to be stored on the property for consumption, and due to the negative aesthetic of a storage tank at the surface, they were mostly buried below ground. The tank had a vent pipe that was often attached to the side of the building so that pressure did not build inside. They also had a fill pipe that was used to refill the tank when empty. After some concern regarding the subsurface impacts of these underground tanks there was a switch to installing them above ground in the 1960s-1970’s. Some were still installed underground after this time (predominantly at larger apartment/commercial buildings that required greater volumes), but it was much less common.

It was estimated that approximately 150,000 homes in the CRD were using heating oil heating systems as of 2011. As records of the installation of underground tanks were not well kept it is unknown exactly how many were installed, and which properties had them. The CRD and municipal fire departments have building cards and permits on file for some properties that will list if a tank was installed, however these records are not comprehensive. These records and helpful in knowing if a tank has already been removed from a property. However, although a tank has been removed, it does not necessarily mean that there is no contamination present at the property from that tank. The tank could have been leaking historically, and just by removing the tank does not clean up that property. This is a common misconception.

The issues and concerns regarding these historical or existing underground tanks typically comes to surface during the sale of properties. During the due-diligence period sellers or buyers will investigate for any prior knowledge or indication of historical tanks. This can be done via a records search, visual inspection or subsurface scan. If there is any evidence of a tank via the records search, visual inspection or based on the age of the home, then a ground penetrating radar (GPR) scan is generally recommended. This will identify if a tank currently exists and can sometimes identify if a tank nest (the backfilled area where a tank previously existed) is present. If either of these are identified, then further work is recommended.

If a tank is present, and not in use, then it should be removed as soon as possible. Following the removal of the tank, the area around the tank should be investigated for any signs of leakage from the tank and soil samples should be collected to determine the quality of the soil and groundwater (is present). If a tank nest is identified, then soil sampling underneath the previous tank would be recommended to identify any historical leaks. If no contamination is identified a report should be prepared by a qualified environmental professional stating such.  This report can be relied upon by prospective purchasers, lenders and insurance companies.  If there is contamination identified then the remediation (clean-up) of the area is recommended.

Remediation can vary greatly in size and cost. However, the majority of tanks have a limited area of contamination that can be dealt with relatively easily. If the water table at the property is near the ground surface and hydrocarbon contamination comes in contact with it; this is a scenario where contamination can spread across the site and cause a larger area to be impacted. In WES’ experience most tank removals and clean-ups (85-90% of properties) can be completed for less than $25,000. The 10-15% of sites that exceed this $25,000 threshold typically have groundwater issues and can sometimes spread underneath structures or beyond the property boundaries. This is why it is recommended to perform the proper due-diligence prior to purchasing. There have also been several court cases which have found past-owners of properties liable for future clean-up costs.

In summary, by being an informed buyer/seller you can avoid headaches that impact the sale or delay the closing of a property. It is better to be safe than sorry!